It’s the height of cold and flu season again which means it’s all out war on sniffles and red running noses.

For those battle fatigued sufferers, endless reinforcements of Kleenex are constantly being supplied to the front lines.

Today we take for granted those ubiquitous boxes of soothing tissues, but for an earlier generation who battled the 1918 flu epidemic, the existence of Kleenex would have been nothing short of a miracle.

Kleenex wouldn’t make its debut until the mid 1920s and a grateful nation suffering from hay fever and winter colds sat up and took note. 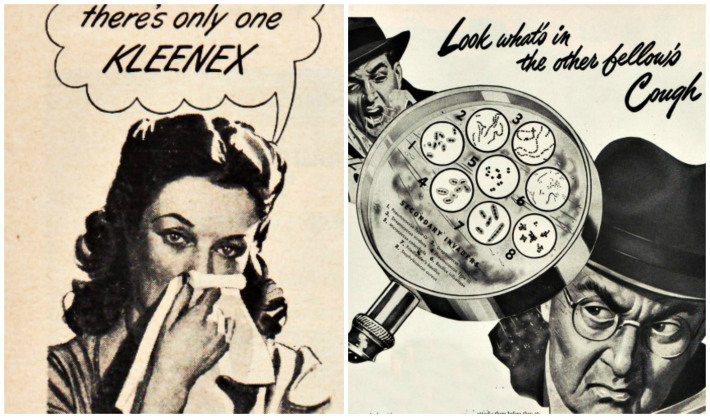 No one was more grateful than my grandmother Sadie.

Tucked into her sleeve, or balled up in her pocket, Nana Sadie never went anywhere without a tissue at the ready, her first line of defense against deadly germs. Nana was certain the air was filled with dust and germs which could then be inhaled resulting in a nasty cold…or worse.

To her, the invention of Kleenex was a modern marvel of science, rivaling sulfa drugs and penicillin in saving mankind. With the simple toss of a disposable Kleenex into a waste basket, you were wiping out thousands of dangerous germs, and saving countless lives.

As a veteran of the first and worst flu epidemic every, old fears and suspicion borne of that war, had scarred Nana Sadie for life.

In 1918 America was at war, not only over there but here at home as well. The Influenza epidemic of 1918 meant it was all out war on the home front too.

It was a panicky time, when everyone and everything became suspect as the cause of contamination mirroring the Red Scare which reached near hysteria that year.

Provoked by a fear that a Bolshevik revolution in America was imminent – a revolution that would destroy the American Way of Life, ordinary people became suspect of being Anarchists and Communists.

So it was with the Influenza, when even everyday items such as books, candy wrappers came under scrutiny and attack as transmitters of the dreaded disease. 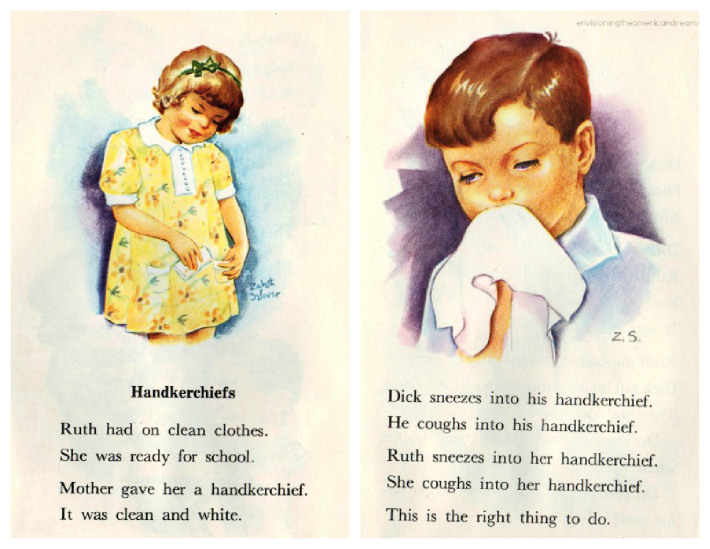 Everything came under suspicion – paper money, ice cream, even wet laundry. No one was safe from that villainous brute Influenza.

“Everyday someone else you knew got sick,” my grandmother would explain sadly.

“It killed the young, the strong, the healthy, the rich, the poor, people who had so much to live for…my own brother and sister, so young, God-rest-their-souls. People avoided one another, they didn’t speak, if they did they turned their faces away to avoid the other persons breathing…”

Dangerous germs, scowling and sneering could be lurking right around the corner- yesterday a suspiciously shared sarsaparilla in a soda fountain, today, a sneeze on a shared seat in a sullied streetcar, tomorrow-who knows- the blunder of a borrowed book from the public library.

But the favorite source of blame continued to be handkerchiefs.To continue reading follow Sally here  at:  “Envisioning the American Dream.”